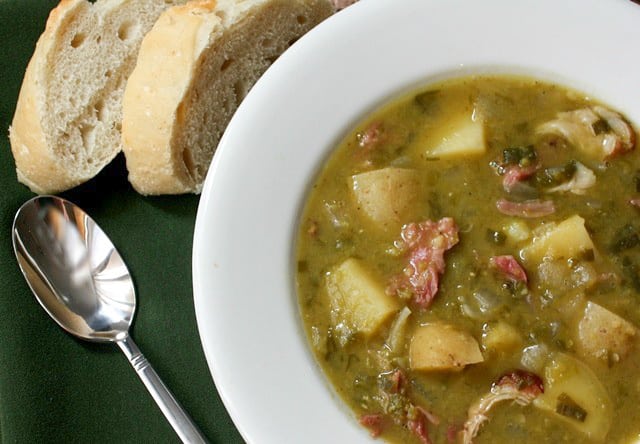 With a rich ham flavor and a balanced combination of potatoes, leeks, and split peas, this Slow Cooker Split Pea Soup was a very pleasant surprise.

My husband loves split pea soup. I’ve tried making it for him several times and each time prior to this, I was unimpressed. Even as a child, split pea soup was my least favorite soup.

Finally, as an adult, I’ve finally discovered a split pea soup I don’t just like or tolerate but really truly LOVE.

When I saw this Split Pea Soup recipe earlier this week, I decided to give split pea soup another chance. I had a ham bone in the freezer already, so this was an easy meal to create from what I had on hand.

I could tell even before I ladled the split pea soup into bowls that this recipe was a winner. The fragrant garlic and simmering split-peas filled my kitchen with the most delicious smell as the soup cooked.

Then, I took a bite and discovered just how delicious split pea soup can be. Chunks of tender baby red potatoes, onion and leeks swim in creamy split peas that are cooked in a garlicky chicken broth flavored with ham bone.

Each and every spoonful of this hot soup was more delicious than the last and it’s easily become one of my top 10 favorite soups of all time. A few years ago I never would have guessed that I’d become such a fan of split pea soup but I’m so happy I discovered this recipe.

We eat soup frequently, even through the summer. I just crank the air conditioning and pretend it isn’t a million degrees outside for a couple of hours. Served with a fresh homemade baguette, this is a great meal that requires almost no effort.

Slow cookers and soup recipes are a match made in heaven. Making split pea soup in the crock-pot is advantageous in a few different ways.

First, the longer cooking time allows the flavors to meld, mingle and marry to create a finished soup with multiple dimensions of flavor. Many soups famously taste better the next day. When you make soup in the slow cooker you can get that “next day” depth of flavor from the very first time you taste it.

The other major advantage of Crock-pot Split Pea Soup is that you can quite literally set it and forget it. This soup recipe is a one pot meal at its best. All you have to do is layer the ingredients in the slow cooker, pour broth over time and let the whole thing cook for a few hours.

Once the potatoes are cooked through and the split peas are tender, you remove the ham bone from the crock and give the whole soup a good stir. At this point, I turn the slow cooker on a lower setting and leave it alone for another couple of hours to thicken.

Split Pea Soup with Potato, Ham and Leeks makes for such a satisfying and easy weeknight meal. It impressed my husband, who loves any and all kinds of split pea soup, as well as my kids who usually aren’t crazy about soup with split-peas.

This soup is also delicious the next day. Store it covered in the fridge and reheat on the stove or the microwave.

Split pea soup freezes well too. Keep it in the freezer in an airtight container or heavy gallon sized Ziploc bag. Let it thaw in the fridge or at room temperature then reheat on the stove top or in the microwave.

Interested in more crock-pot soup recipes like this? This list of 10 of my favorite Slow Cooker Soups for Fall is a great starting point for getting some good use out of your crock-pot .

Another recipe I love that uses ham bone is this Creamy Pinto Bean, Ham and Sweet Potato Soup. Like the split-pea soup, it’s homey, comforting and sure to become a family favorite.

If it’s Instant Pot soup recipes you’re after, take a look at this Southwestern Instant Pot Split Pea Soup with Potatoes. The southwestern spices in the recipe alone are enough to pique my interest!

How to Choose a Slow Cooker 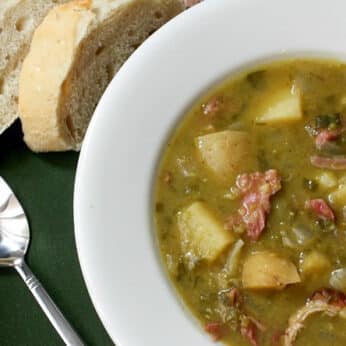 Recipe adapted from and with thanks to Full Measure of Happiness
Pin Print Review
Servings: 5 -6 servings
Prevent your screen from going dark 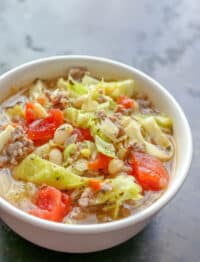 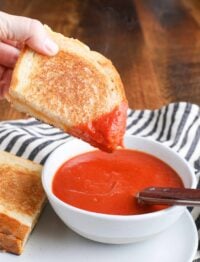 The Tomato Soup You Are Going To Crave 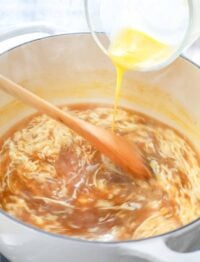 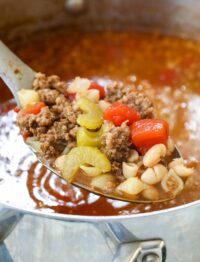