Apple Crisp Ice Cream, the name alone sounds heavenly, doesn’t it? That’s before I tell you that it is made with the creamiest of homemade vanilla ice creams, then completely loaded with bits of cinnamon sweet baked apples and crunchy streusel topping.

There is nothing about this ice cream that I did not love. (Except perhaps the fact that I ate way too much of it.)

The idea for this ice cream popped into my mind a few weeks ago. I tried a couple of different versions using the same ingredients, but not the real apple crisp. They lacked the true apple crisp flavor I wanted.

I finally caved and decided to bake an actual apple crisp just for the ice cream. As soon as my apple crisp finished cooling last week, I was chopping it into bits and folding it into this ice cream. I don’t know when I’ve been more excited about an ice cream recipe.

I initially thought of this recipe as “sacrificing” an apple crisp for the ice cream, but after one bite, I realized it was no sacrifice. I ate this ice cream off a spoon straight out of the freezer, and served it in ice cream cones as well.

I might have even gone a little crazy and scooped the last of it over a warm brownie last week as well. (That was tasty, but way too rich and randomly flavored even for my sometimes bizarre tastes!) This ice cream is already in my all-time favorite recipes list.

The pieces of apple crisp don't need to be uniform at all. Roughly chopped is perfect. However, a large piece of apple will turn icy once frozen. Making the pieces small, nothing bigger than 1/2" in size, will keep the texture nice, instead of creating icy chunks of apple in the otherwise creamy ice cream. Place the ice cream on the counter to warm for 10-15 minutes prior to scooping, if it is extra firm when you are ready to serve it.
Tried this recipe?Mention @barefeetkitchen or tag #barefeetkitchen!
Pin this nowto remember it later
Pin this recipe0 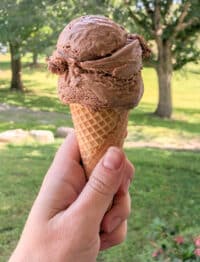 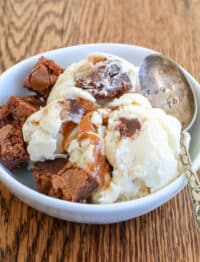 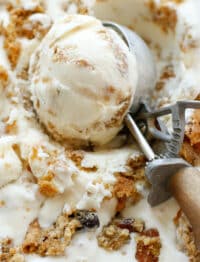 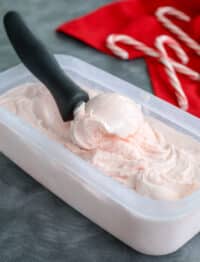