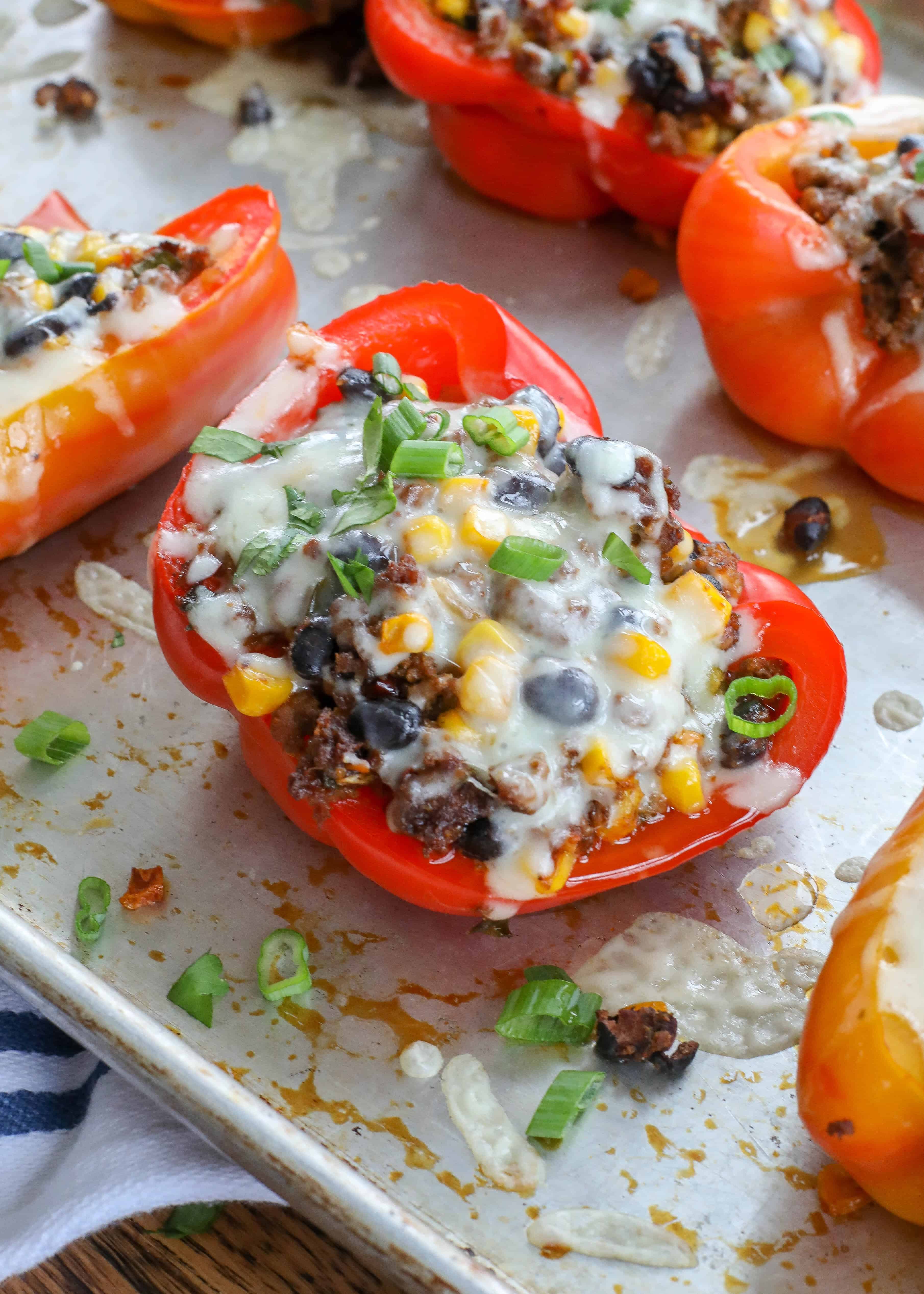 Ground beef, black beans, and corn are cooked with Mexican spices and then tucked inside fresh bell peppers to create a cheesy, flavorful filling for these Spicy Mexican Stuffed Peppers.

It is a well-established fact that my husband and my oldest son love stuffed bell peppers. They would happily eat Spicy Italian Stuffed Peppers every week if I made them that often. 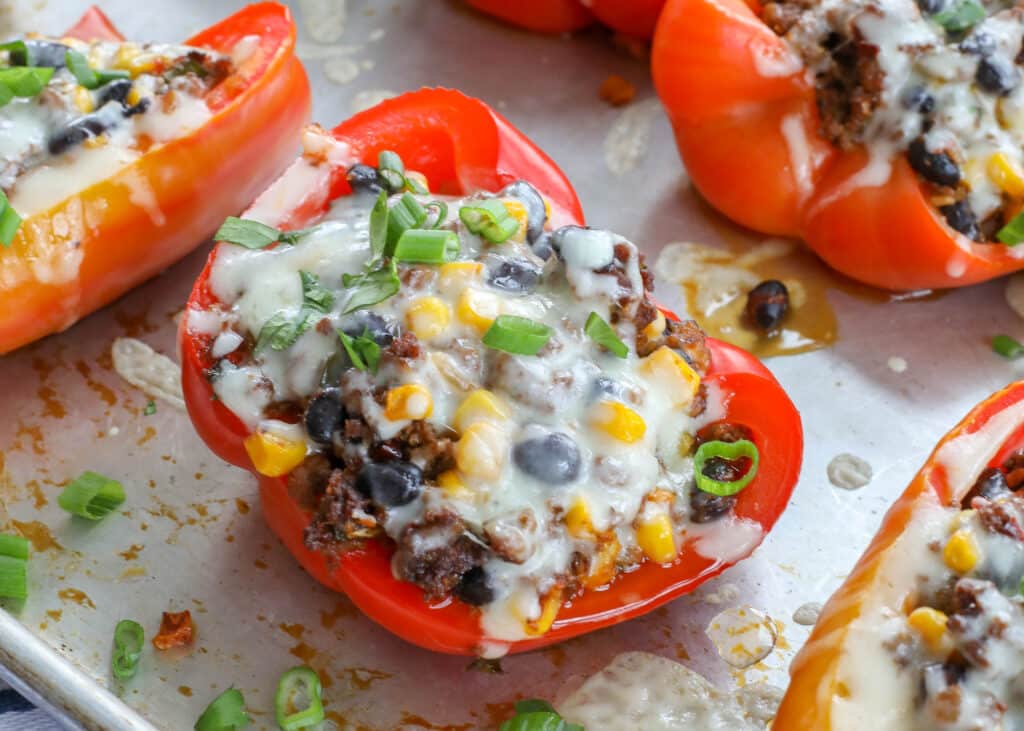 Anytime bell peppers go on sale, I jump at the chance to make those Stuffed Peppers or Crock-Pot Stuffed Bell Pepper Soup.

As always, when my family really likes a meal, I start thinking about other ways I can incorporate those ingredients into different meals.

This time I decided to play with some Mexican flavors and the meal was a hit. Mexican spices are a natural pair to peppers and we were all thrilled with the results.

You can adjust the spices easily and make these as mild or hot as you like. I used my Mexican spice mix for this recipe, but your favorite taco seasoning will work as well.

I recommend a seasoning mix that has plenty of cumin, garlic powder, oregano, and onion powder. 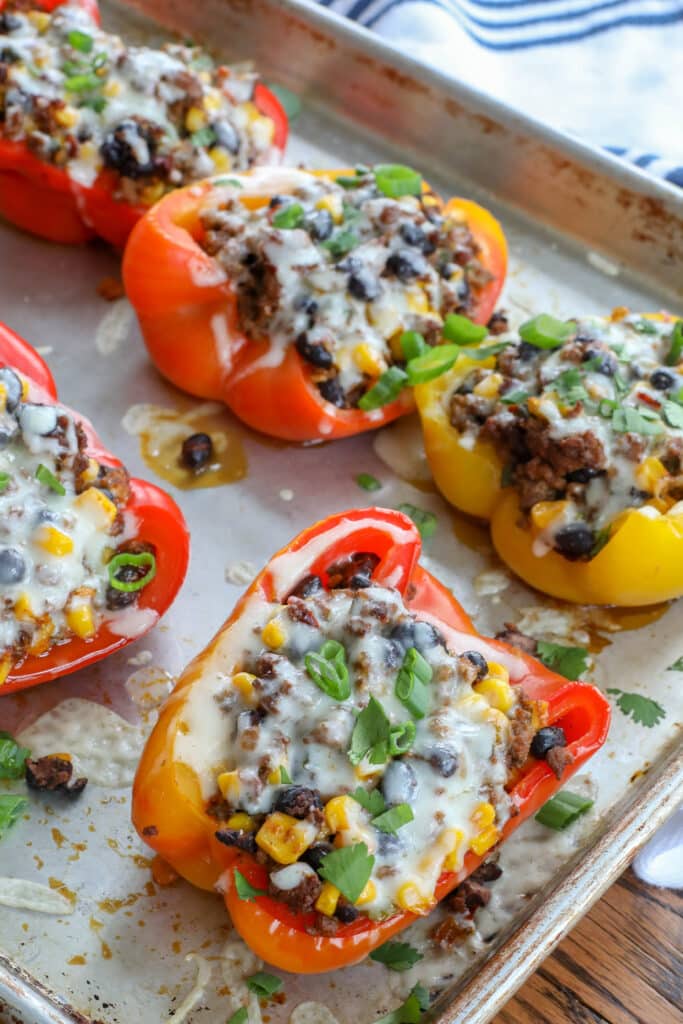 How to Make Stuffed Peppers

Much like the Zucchini Boats I shared a couple of weeks ago, bell peppers become vehicles for delivering a filling of spiced ground beef, black beans and corn to your mouth in this stuffed pepper recipe.

To make stuffed peppers, start by cutting your bell peppers in half lengthwise and removing the seeds. Brown ground beef in a skillet, then add corn, beans, spices, and green onions.

I like to stir in about half the cheese at this point, to help the filling hold together a bit as I’m stuffing the peppers – and also because more cheese throughout a dish is always a good thing, right? 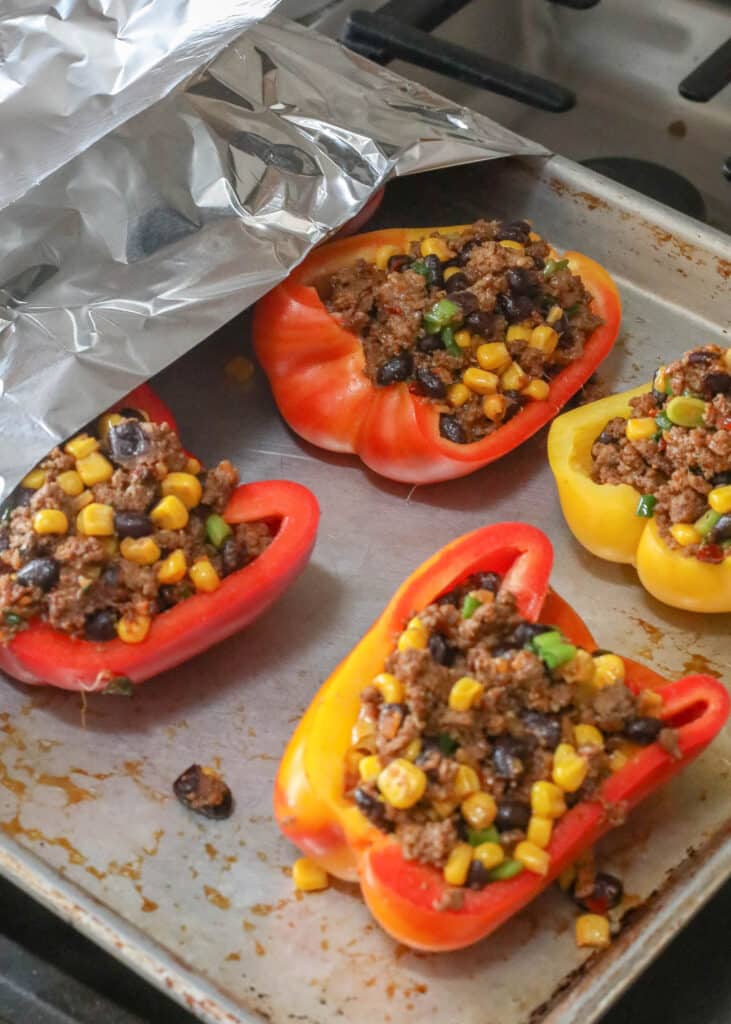 After scooping the prepared filling into the bell pepper halves, cover with foil and bake the stuffed peppers for about 50 minutes – or until the peppers are fairly tender.

Sprinkle a little cheese (or a lot of cheese if you’re like my family!) on top of the peppers and continue baking for another few minutes until the cheese melts.

Pepperjack cheese is my favorite cheese variety for this recipe. It has just the right amount of tang and sharpness to complement the spiciness of the beef.

Alternatively, you can use shredded cheese or thin slices. Just make sure to choose a cheese that will melt nicely. Feel free to adjust the amount of cheese to suit your preferences. 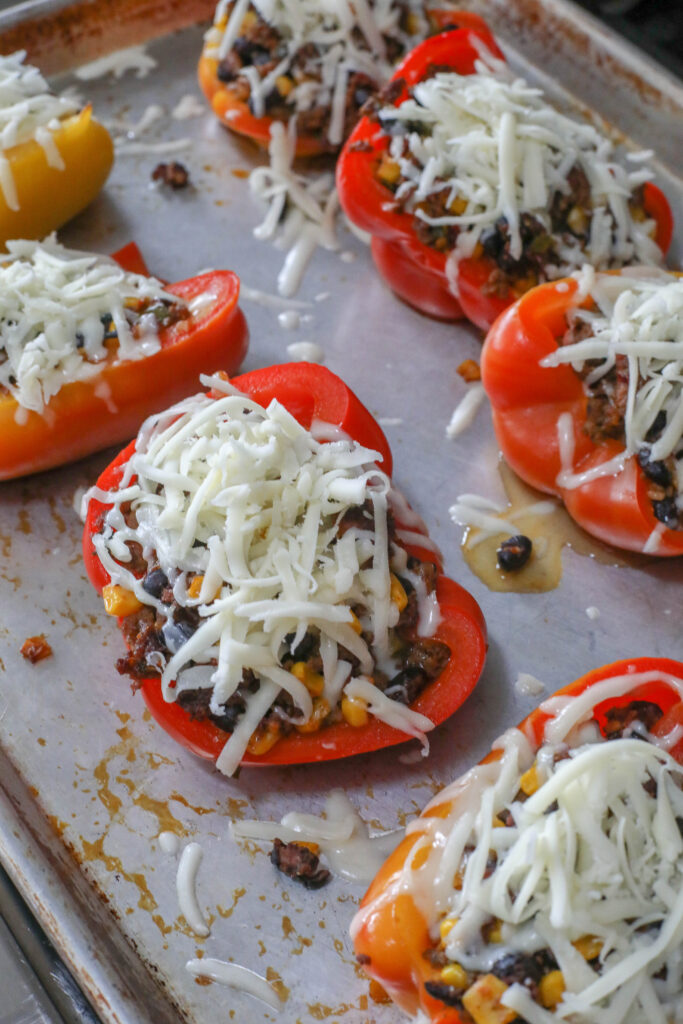 I like to top the finished peppers with chopped fresh cilantro and a few more green onions. These stuffed bell peppers turn out spicy, cheesy, and delicious every time.

These make a great weeknight meal, served the peppers with a simple side of Roasted Broccoli. They would also be delicious with Chipotle Lime Rice or Spanish Rice.

Feel free to prep the filling in advance and store it in the fridge until you’re ready to bake the peppers. Double the filling recipe to eat in tacos, burritos, on nachos or in taco salads throughout the week as well! 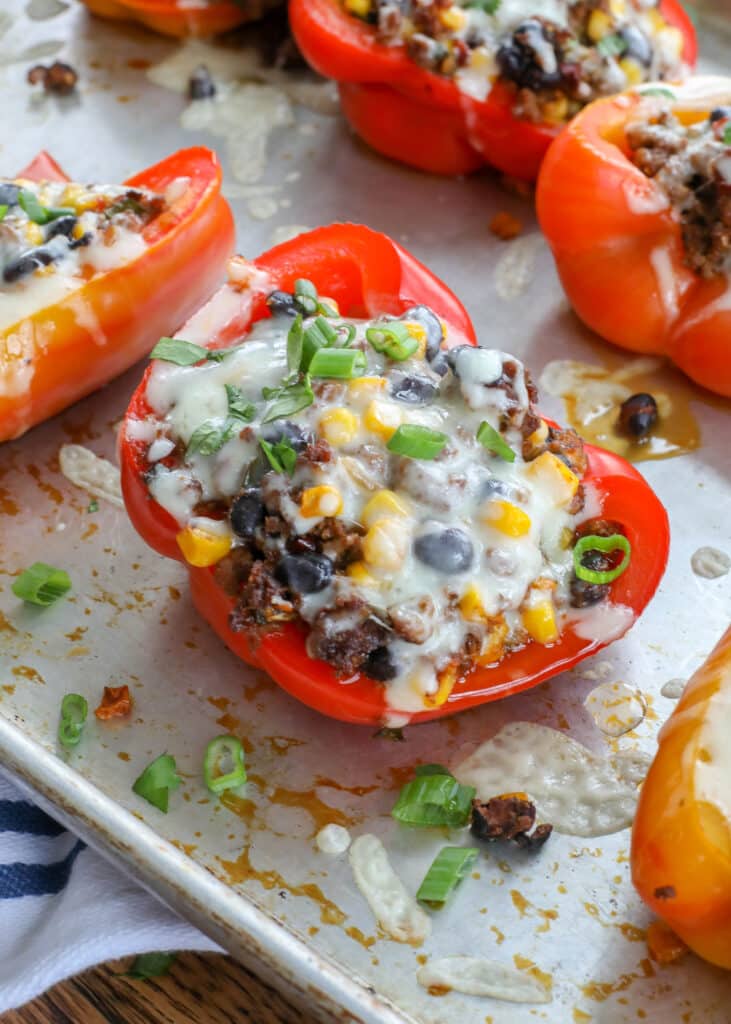 This recipe makes enough to serve 4-5 hungry folks but if you have good eaters in your family or more folks to serve, it can be doubled or tripled with ease. Stuffed Peppers make a great meal for company!

There’s no shortage of other Mexican food recipes on this site. My family has never turned down a meal packed with Mexican inspired flavors and ingredients.

Beyond stuffed peppers, Cheesy Mexican Baked Pasta and Creamy Mexican Chicken and Corn Soup are favorites that might not immediately come to mind when you think of Mexican food. 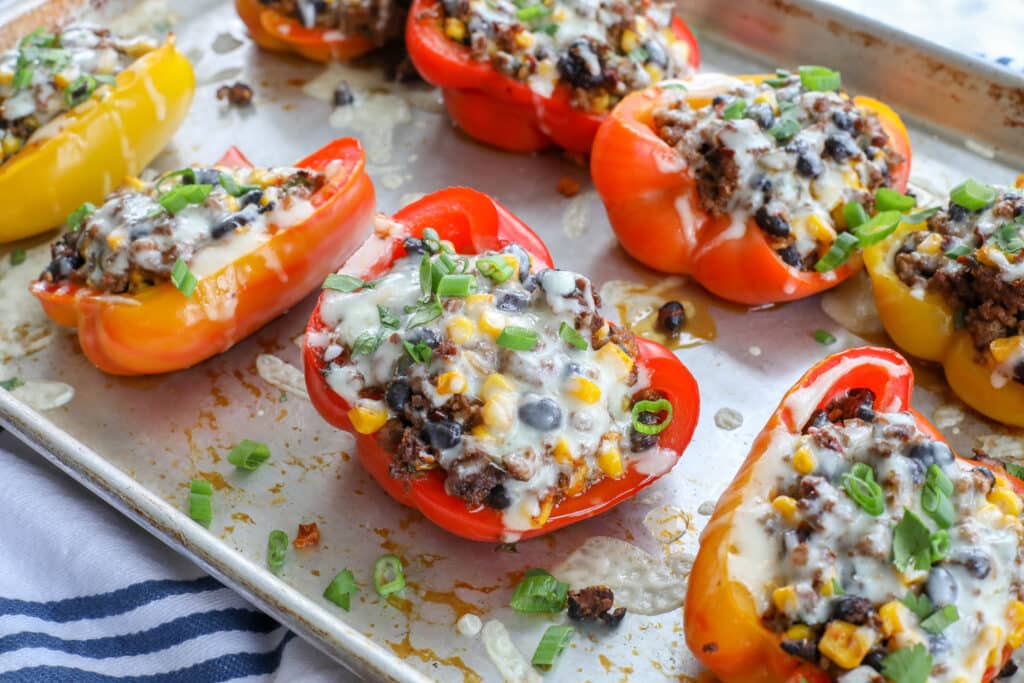 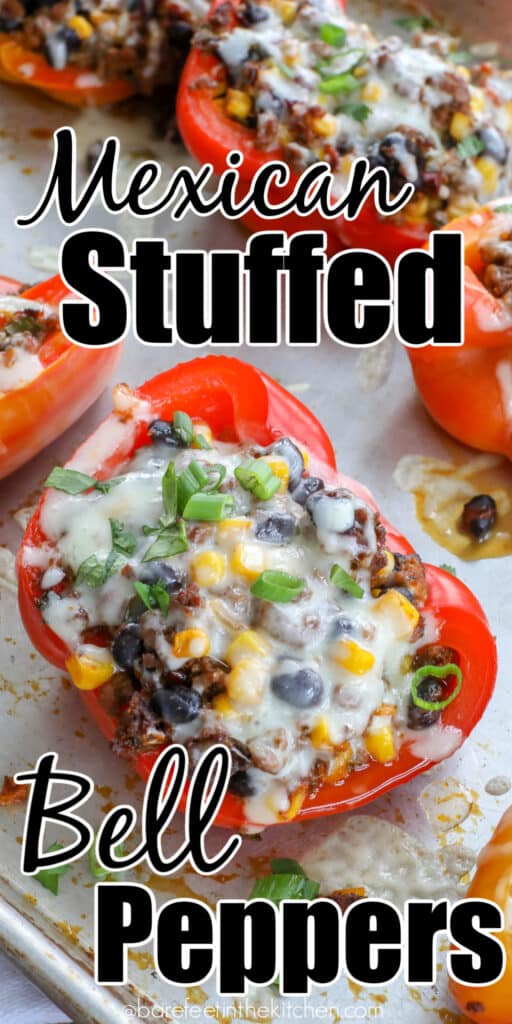 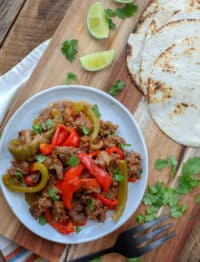 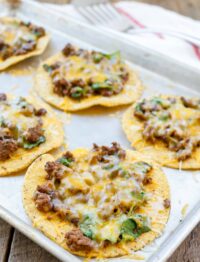 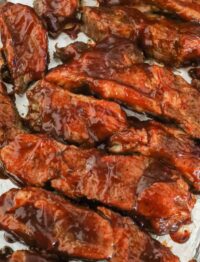 How To Cook Country Style Ribs in the Oven 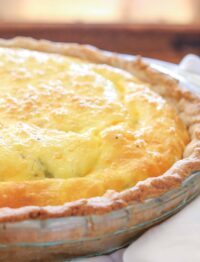